IHBC’s ‘Heritage from the doorstep’: Take a tour inside the Hull mosque – with the Hull Daily Mail 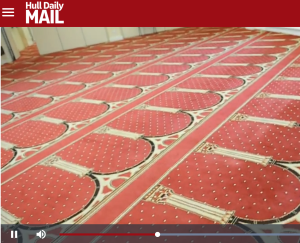 The mosque is an unassuming building in a quiet area of Hull – Berkeley Street, off Beverley Road – but serves 15,000 people, as James Campbell discovers when he takes a look inside on behalf of the Hull Daily Mail

The rather foreboding exterior with its sharpened metal fence, small windows and red brick belies the warm welcome you receive inside. Hull’s mosque is a far cry from the grand domed buildings with ornamental towers you may see across the Middle East. Set in the rather mundane setting of Berkeley Street, off Beverley Road, it is hard to believe it serves some 15,000 Muslims across the region. As much as we want to be seen as tolerant and open-minded it can be hard to divorce ourselves from what we hear on the news. I’ll hold my hands up – until this trip I had never been in a mosque and I imagine a fair percentage of others haven’t either. So I decided to head along to see exactly what goes on inside that unassuming building.

I was met by the amiable and charismatic Imam Hafiz Salik and, after taking my shoes off, we had a look around. He told me: ‘We always ask people to come in and have a look. We have schools and colleges coming in. We aren’t just a mosque but a community hub too.’

For the most part the mosque looks like any community centre except that the carpet is patterned with arches angled 25 degrees southeast towards Mecca, known as Qibla, which is the direction for Muslim prayer. There are also shelves full of copies of the Koran and there is a pleasant lingering scent of spice and lavender. For Imam Salik and other worshippers, they maintain a sense of humility and the décor inside is very simple…

… Imam Salik said: ‘During Ramadan we have thousands come through our doors and have to accommodate three congregations a day. Across the region we serve 15,000 people and we have a thriving but peaceful Muslim community and I am very proud of that.’