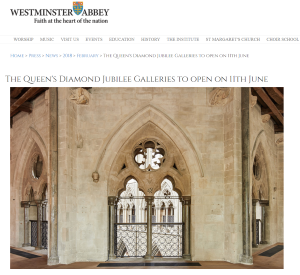 Westminster Abbey has announced that The Queen’s Diamond Jubilee Galleries will open to the public on 11 June 2018, while the museum galleries, set more than 50ft (16 metres) above the Abbey’s floor in the medieval Triforium, will display some of the greatest treasures from the Abbey’s collection.

Once described as offering the ‘best view in Europe’ by English poet John Betjeman, the Triforium has never before been open to the public. Visitors will reach the Jubilee Galleries through a new tower, housing a staircase and lift. Named as the Weston Tower, this first major addition to the Abbey church since 1745 will offer previously unseen views of the Palace of Westminster.

The Dean of Westminster, the Very Reverend Dr John Hall, said: ‘The Dean and Chapter has been planning for some years to create this new museum in the Triforium and is very glad to have reached this moment. We are grateful to Her Majesty for allowing us to name the Galleries in honour of The Queen’s Diamond Jubilee and to all the donors and those who have worked so hard to turn the vision into reality. I think people will be amazed and thrilled at the space and the views as well as the astonishingly rich collection of objects on display, with connections throughout the past thousand years.’

The Weston Tower, designed by Ptolemy Dean, the Abbey’s Surveyor of the Fabric (Consultant Architect), is outside Poets’ Corner, tucked between the Abbey’s thirteenth century Chapter House and sixteenth century Lady Chapel. The design takes inspiration from a pattern often found in the Abbey: a star shape derived from two rotating squares. Built using a mix of traditional and new materials, the tower is sympathetic to the Abbey’s building style.

The exhibition has been designed by MUMA (McInnes Usher McKnight Architects), and tells the story of Westminster Abbey through 300 objects in four themes:

Building Westminster Abbey charts the foundations of the first Benedictine monastery in AD 960, through its life as Edward the Confessor’s Church, and the extensive repair programme during Sir Christopher Wren’s role as Surveyor of the Fabric (1698 – 1723). Visitors are able to see for the first time a Column Capital from the cloister of St Edward the Confessor’s Church (around 1100), along with an intricate scale model of Westminster Abbey (1714-16) commissioned by Sir Christopher Wren with a massive central spire which was planned, but never built.

Worship and Daily Life gives insight into the life of a working church with daily worship at its heart. Artefacts demonstrating the long history of worship in the building include The Westminster Retable, (1259 – 69) the oldest surviving altarpiece in England from Henry III’s Abbey, and the Litlyngton Missal, an illuminated 14th century service book made for the Abbey’s high altar.

Westminster Abbey and the Monarchy looks at its special relationship with the Crown. The Abbey, a Royal Peculiar under the direct authority of the Monarch, has been the Coronation church since 1066. Mary II’s Coronation Chair (1689), created for William III and Mary II’s joint coronation (the only joint coronation in English history), is on display as is the marriage licence of The Duke and Duchess of Cambridge (2011).

The Abbey and National Memory shows how Westminster Abbey has developed into a place of commemoration and remembrance. As well as kings and queens, many notable Britons such as Geoffrey Chaucer and Sir Isaac Newton are buried and memorialised here. Since 11 November 1920 the Abbey has also become a particular focus for Remembrance following the burial of the Unknown Warrior. Three early guidebooks, including The Gigantick History of Westminster Abbey, which was designed for children in 1742, reveal the Abbey’s special place in the heart of the nation from a much earlier time.

The total project cost has been £22.9m, all of which has been met by private donors and trusts.