IHBC’s Taste of the 2018 School: A Titanic update from Belfast and EYCH 2018 – Great Light and Titanic Walkway opened with EYCH NI launch 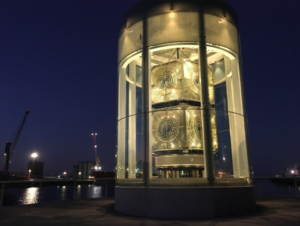 Belfast, the setting of the IHBC 2018 School on 21-23 June, has seen its offerings as a maritime heritage destination given a major boost as two iconic attractions – the Great Light and Titanic Walkway – officially opened to the public in Belfast’s Titanic Quarter on 8 March, an event that also saw the launch of The European Year of Cultural Heritage (EYCH) 2018 for Northern Ireland.

Kerrie Sweeney, Chief Executive of Titanic Foundation, and speaker at the IHBC’s 2018 School, said: ‘At around 130 years old, weighing 10 tonnes and standing seven meters tall, the Great Light is a unique heritage object of national and international importance with links to our maritime and industrial past. We are delighted to have played a role in saving this fantastic artefact and preserving it in Titanic Quarter for everyone to enjoy.’

The Titanic The Great Light gave Mew Island Lighthouse on the Copeland Islands its traditional revolving light and guided mariners to and from Belfast Lough until 2014. It is the world’s first and largest hyper-radial Fresnel lighthouse lens, installed in Tory Island Lighthouse in 1887 then reconfigured and moved to Mew Island in 1928.

The optic was removed from Mew Island in 2014 as the lighthouse was modernised and converted to solar power.

The Great Light project from Titanic Foundation, the charity committed to preserving Belfast’s maritime and industrial heritage, in partnership with the Commissioners of Irish Lights, will see the optic given a new role bringing to life the story of lighthouses, their technological developments, their light-keepers and their role in the maritime and industrial history of Belfast and beyond.

From Friday, 9 March, visitors will be able to walk the new 500 metre Titanic Walkway on Victoria Wharf, which connects the Titanic Slipways to HMS Caroline and the Thompson Dock, learning about the maritime and industrial heritage of the area on their way to the Great Light. This iconic waterfront walkway has been delivered by Titanic Quarter Limited.

The projects have been funded by Tourism NI, the Heritage Lottery Fund, Belfast City Council, Ulster Garden Villages and the Commissioners of Irish Lights….

Anna Carragher, Chair of the Heritage Lottery Fund Northern Ireland, said: ‘Thanks to National Lottery players, the Great Light has been conserved and given new meaning as the beacon which connects the wealth of maritime and industrial heritage attractions on offer in Titanic Quarter.  National Lottery funding has been crucial in transforming this area – HMS Caroline, the Nomadic and Titanic Hotel Belfast amongst those to have benefited –which now attracts both local and international visitors to learn about the former shipyard, its workers and the wider industrial development of the city.

‘Today also marks the launch of the European Year of Cultural Heritage in Northern Ireland.  The slogan for the year is Our Heritage: Where the past meets the future, and nowhere is this more fitting than here in Titanic Quarter. We are working with the Department for Communities Historic Environment Division, Tourism Northern Ireland, the Arts Council and the British Council to help leverage the potential of our cultural heritage in new and interesting ways….’

TO BOOK the 2018 School just follow the School’s homepage at belfast2018.ihbc.org.ukand other booking links, or go direct:

For all and more on the IHBC’s 2018 Belfast School see belfast2018.ihbc.org.uk

See Titanic Foundation website for article on opening of the Walkway