IHBC’s ‘Heritage from the doorstep’: Stone ceiling at Coventry’s listed medieval Guildhall to be painted over, despite objections 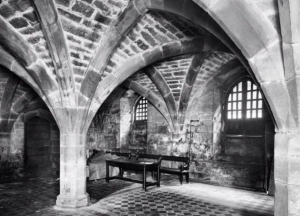 The Coventry Observer describes how a beautiful medieval stone ceiling at the listed St Mary’s Guildhall is set to be painted over by Coventry council chiefs – despite formal and community objections.

Officials at Historic England formally registered its concern with council officials before an unelected planning officer granted Listed Building Consent for the plan behind closed doors on December 22. It followed a brief public consultation. The intricately carved ceiling is to be painted white. It is the ceiling of the vaulted undercroft at the Grade 1 listing Guildhall in Bayley Lane next to the cathedral ruins.

The Guildhall has been described by the high-profile medieval historian Dr Jonathan Foyle as one the finest surviving medieval buildings in the country. The undercroft is currently used as a cafe at the Guildhall which was originally built in 1340–42 for the merchant guild of St. Mary, and was later the prison of Mary, Queen of Scots.

Paul Maddocks, of the Coventry Society, told us: ‘The lovely medieval ceiling of St Mary’s is to be whitewashed so it can be lighter in the basement cafe. The Historic England report said it would be better if a more sophisticated lighting system with the latest technology was installed…

… Council officers have claimed whitening the panels between the vaulting ribs in the undercroft ceiling would have been part of the original medieval building, to maximise the restricted natural light. But that claim was contested in a formal letter to city planners by Historic England. It stated there was no evidence it had ever been painted, and strongly recommended sophisticated lighting instead…

Beautiful stone ceiling at Coventry’s listed medieval Guildhall to be painted over, despite Historic England objections