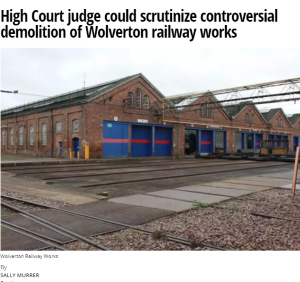 MK Citizen reports on how a Milton Keynes Council decision on the controversial demolition of Wolverton railway works may be scrutinised by a High Court judge as Historic England seeks judicial review.

Property developers St Modwen want to build up to 375 houses on half the site, with the remainder allocated for industrial use. The £100 million scheme has been given the green light by Milton Keynes Council, despite protesters efforts to save the historic buildings. Historic England describe the plans as ‘deeply flawed’ and ‘unsustainable’ .

Now, unless MK council and St Modwen agree to drop the scheme, Historic England will seek permission for the matter to be heard in the High Court…

MK Council granted planning permission last September for the demolition and redevelopment. Historic England expressed its ‘deep concern’ at the way that the Council has dealt with the proposed redevelopment. Dr Andy Brown, South East Planning Director for Historic England, said this week: ‘We have now informed the Council of our intention to seek a Judicial Review of their decision. We will be asking the High Court in London for permission to make our case to a senior judge. If the Judicial Review is successful, the planning permission will be overturned, which would give us and local people another chance to work towards a less damaging scheme.’