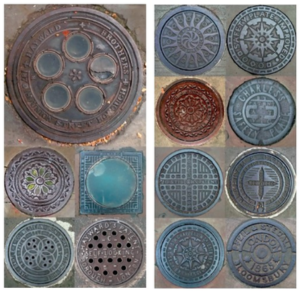 In the latest IHBC member journal, Context, Rob Cowan writes about less familiar materials in the issues floorscape – iron, glass and wood etc. – focussing on aspects from the decorative to the utilitarian, and from the photographed to the forgotten.

‘It is a delight when something underfoot tells of a place’s history’.

‘In the 19th century the manufacture of pavement lights for commercial premises became big business. Replacing open gratings, they allowed light into basement rooms, while providing a walkable surface at street level and keeping out the rain. In the mid-19th century pavement lights were made of blocks of glass set in a metal fame. Notches in the metal, and often the raised lettering with the maker’s name, made the surface less slippery for people passing along the street.’

Reading Context ensures that IHBC members develop their skills across all of the IHBC’s Areas of Competence, and so is a critical baseline in addressing priorities in Continuing Professional Development (CPD).

As ever, themed issues of Context also include more general conservation articles as well as news, book reviews and reports from IHBC’s officers.

Access the online archive and see the issue online