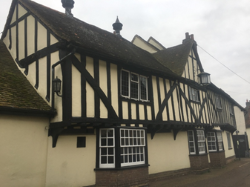 Brentwood Borough Council (BC) has reported that a planning company, Smart Planning , and its representative, have been given substantial fines for wilfully obstructing council officers in the course of their work, as Colchester Magistrates Court praised local authority officers for offering ‘consistent, professional and credible’ evidence.

Smart Planning was found guilty of wilful obstruction “by the act of another”- its employee Paul Clarke – who was also ordered to pay £2,114.  The offence happened on May 23, last year at 53 High Street, Ingatestone.

The same company, Smart Planning, was found guilty of a second charge of aiding, abetting, counselling or procuring another to wilfully obstruct a Brentwood Borough Council officer at the Bull Inn in April this year.  For this offence Smart Planning was ordered to pay £1,368, whilst its principle director Russell Forde was additionally ordered to pay the same amount of £1,368. It brings the total bill Smart Planning and its Director Russell Forde must pay for both offences as ordered by the court, to £6,202.

Colchester Magistrates Court praised local authority officers for offering “consistent, professional and credible” evidence. At the same time, the bench noted that Smart Planning’s Paul Clarke was ‘not to be credible as a witness, and that his version of events was wholly at odds with the clear evidence of the local authority officers.’

Environment & Enforcement Committee Chair, Cllr Keith Parker said: ‘I am delighted that Smart Planning was found guilty, and fined, for these offences. It sends out a clear message that Brentwood Borough Council will take legal action to protect staff against any business, and individuals,  who wilfully attempt to obstruct our officers legally going about their work. Our staff are men and women who are experts in their field, and conduct themselves with the utmost professionalism.’

The magistrates praised our officers for their exemplary behaviour and witness accounts. They also noted that Smart Planning’s Paul Clarke, in respect of his offence, was not credible as a witness – and that his version of events was wholly at odds with the clear evidence of the local authority officers.

Cllr Parker added: ‘It is utterly unacceptable for anyone to intervene illegally in such matters and this ruling makes it abundantly clear that such behaviour will not be tolerated either by the local authority or indeed, the law.’

The second offence took place at the Bull Inn on April 5, 2017 and involved Smart Planning’s principle director Russell Forde and its client Daniel Keeble. Keeble was found guilty of wilfully obstructing an officer. He was fined £500 with a £50 victim surcharge and £135 costs, while Russell Forde was found guilty of aiding, abetting, counselling or procuring Daniel Keeble to wilfully obstruct an officer at the Bull Inn on the same day.

Cllr Keith Parker said: ‘It really is extraordinary to find the same company involved in unlawful action against officers on two separate occasions and at two different properties. It is interesting to note that the bench said it was satisfied that at all times the LA officers were properly acting in the exercise of a lawful right of entry. Once again the exemplary behaviour of council officers going about their work was illegally challenged in totally unacceptable circumstances. It is most reassuring that the courts agreed and levied considerable sums against both the individuals concerned and Smart Planning as a company business.’