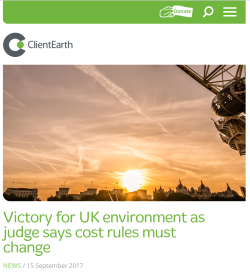 The High Court has told the UK government that its new rules for environmental cases must be changed to protect those taking legal action.

The High Court recently ruled that the UK government’s new rules for environmental cases must be changed to protect those taking legal action, which ClientEarth has called a ‘victory for UK environment’.

The case was launched by charity ClientEarth, which was formed by activist lawyers, alongside Friends of the Earth and RSPB after the UK government has introduced new rules which they say make it ‘almost impossible to bring an environmental case in the public interest’.

In his judgement, Mr Justice Dove said the rules would benefit from further clarification in key ways but that they will remain in place. The government must now make the changes. The Ministry of Justice (MOJ) had resisted calls from environmental charities to clarify and amend their rules so they would not be used unlawfully, and had – until now – strenuously resisted.

The rules, introduced in February 2017, scrapped fixed costs limits on how much individuals and charities had to pay if they lost a case against a public body. Now, with the High Court ruling, caps will still be fixed at the beginning of a case, which will allow people or charities taking a case to know how much it will cost them at the start. This was in line with the case put forward by the RSPB, Friends of the Earth and ClientEarth  against the MOJ.

In a statement following the judgement, the three charities said: ‘Today’s verdict is an important victory in the battle for better access to justice in England and Wales. People who bravely stand up for nature by going to court can now do so in the knowledge that, once the costs are fixed, they will not be blindsided by a crippling legal bill they were not expecting and hadn’t budgeted for. Another victory from the hearing is that claimants will no longer have to reveal their private financial details in open court, as any hearing about costs protection limits will now take place in private. The MOJ must change its rules to include this, so that they are lawful.’

A spokesperson from the Ministry of Justice (MoJ) said: ‘We are pleased that the High Court supports our approach to environmental costs protection, which ensures individuals are not expected to pay above their means. We will address the issue of private hearings and set out our position in due course.’

The MoJ said that the government made measured adjustments to the regime of costs protection for certain environmental claims in England and Wales in February 2017, following a consultation. It said that the proposals were developed in the light of recent developments in case law, and legal aid remains available where the claimant satisfied the criteria.

See more at Civil Society news and at Clientearth.org