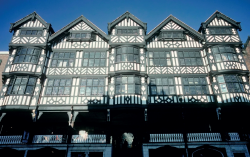 A study of Chester carried out in the 1960s led to a pioneering programme of conservation in the city and it had a profound impact on the emerging profession of building conservation.

This article originally appeared in IHBC’s Context 148, March 2017, written by Sir Donald Insall, a consultant to Donald Insall Associates, who founded the practice in 1958, and was chairman from 1958 to 1998.

See the original article and view the article on Conservation Wiki