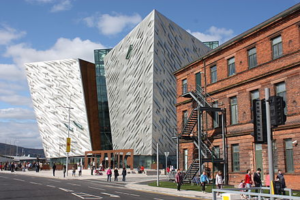 The co-owner of Belfast’s Titanic Quarter project has injected another £29m into the business, ensuring that there will be even more to consider at the IHBC 2018 School in Belfast in June.

Dermot Desmond made the move, by way of a loan, as part of a refinancing exercise in February. Mr Desmond ultimately owns the Titanic Quarter project, in partnership with the developer, Pat Doherty. In 2016, the Titanic Quarter group of companies made a pre-tax loss of just under £1m on turnover of £10.5m.

Nick Reid, a former chief executive of the William Ewart property business, has been appointed executive chairman of Titanic Island, the top company in the group. He said the refinancing, which also included new borrowing from Danske Bank, had been important for the future of the group. He said: ‘The group and its shareholders are committed to progressing further development in Titanic Quarter in the near term. Once complete, these developments will further contribute to the positive impact of Titanic Quarter on the local economy and on the infrastructure of Northern Ireland.’

Work is due to begin on an office project, known as Olympic House, before the end of 2017.