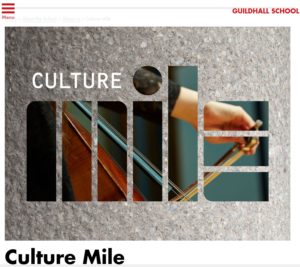 The area between Farringdon and Moorgate is to become ‘culture mile’ over next 10-15 years.

Culture Mile will see the City of London transform into a vibrant cultural and creative destination and become a major destination for culture and creativity over the next decade and beyond.

The City of London Corporation, together with the Barbican, Guildhall School of Music & Drama, London Symphony Orchestra and Museum of London, are leading this ambitious and transformational initiative to create a vibrant cultural area in the north-west corner of the City.

Stretching just under a mile from Farringdon to Moorgate, Culture Mile will have creative exchange, cultural collaboration and learning at its core in an area where 2,000 years of history collide with the world’s best in culture. So whether you’re with family, friends or flying solo, there’s something for everyone. And thanks to Crossrail’s new Elizabeth Line connections at Farringdon and Moorgate, the area is more connected than ever.

The regeneration of the area will include three major building projects – the new Museum of London at West Smithfield, the proposed Centre for Music, and a major transformation of Beech Street.

Culture Mile is at the start of its journey to create a vibrant creative community in the north-west of the City, and visitors to the area will start to see some transformations and pop-ups from summer 2017, including vivid installation Joy and Peace from artist Morag Myerscough, lighting installation Shadowing by Playable City and Chomko & Rosier, and a new community garden on Moor Lane.

Get more details of Culture Mile activities, pop-ups and future plans on the website: www.culturemile.london

Read the press release and the article