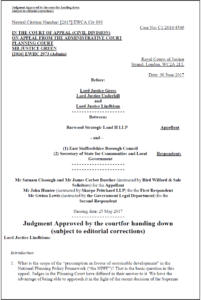 The IHBC has welcomed the recent Court of Appeal ruling, upholding a High Court ruling, that subordinates National Planning Policy Framework (NPPF) development presumptions to the statutory authority of an up-to-date local plan, as the NPPF is no more than ‘guidance for decision-makers, without the force of statute behind it’.

IHBC Policy Chair Roy Lewis said: ‘This judgment, relating to a case in East Staffordshire, makes clear the importance of up-to-date development plans, and that the NPPF is not the over-riding consideration in every planning decision.’

‘The statement in paragraph 13 of the decision – that ‘the NPPF is the Government’s planning policy for England. It does not have the force of statute, and ought not to be treated as if it did’ – is entirely consistent with comments made by IHBC with regard to a number of heritage policy issues in England in recent years.

‘By implication, the judgment once again emphasises the relative importance of sections 66 and 72 of the Planning (Listed Buildings and Conservation Areas) Act 1990 in making planning decisions in relation to development that affects listed buildings and conservation areas.  These are, and should remain as, the starting points for any credible heritage policy developments in England.’

Para 13 of the Decision states:

The NPPF is the Government’s planning policy for England. It does not have the force of statute, and ought not to be treated as if it did. Indeed, as one might expect, it acknowledges and reinforces the statutory presumption in favour of the development plan, and it also explicitly recognizes and emphasizes its own place in the plan-led system of development control. Its “Introduction” acknowledges that “[planning] law requires that applications for planning permission must be determined in accordance with the development plan, unless material considerations indicate otherwise”, and that “[the NPPF] must be taken into account in the preparation of local and neighbourhood plans, and is a material consideration in planning decisions”. Paragraph 12 recognizes that the NPPF “does not change the statutory status of the development plan as the starting point for decision making”. Paragraph 13 describes the NPPF, correctly, as “guidance for local planning authorities and decision-takers”, which, in the context of development control decision-making, is “a material consideration in determining applications”. Paragraph 215, in “Annex 1: Implementation”, says that “due weight should be given to relevant policies in existing plans according to their degree of consistency with [the NPPF] (the closer the policies in the plan to the policies in [the NPPF], the greater the weight that may be given)”, but this too is guidance for decision-makers, without the force of statute behind it.

See the Decision at Bailii.org