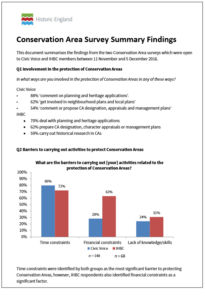 Historic England, working with Civic Voice (CV) and the IHBC, has released results of two parallel surveys of IHBC and CV members’ perceptions of conservation areas in their 50th anniversary year.

CV and HE write:

What do local civic society members and heritage professionals think has been achieved, and what more needs to be done?’…

2017 marks the 50th anniversary of the 1967 Civic Amenities Act and the establishment of the first conservation area in Stamford, Lincolnshire. To mark the event, Historic England has been working with Civic Voice and the Institute of Historic Building Conservation (IHBC) to build a picture of their members’ attitudes towards conservation areas half a century on through two parallel surveys. A range of Civic Voice members from local civic societies across the UK and IHBC professionals from the public and private sector took part in the surveys.

The picture, however, is not all positive and respondents from both groups did identify a number of issues to be confronted in this anniversary year. The controls in conservation areas are not well understood. Only 2% of IHBC and Civic Voice members believed the general public have a good understanding about the extent of additional controls in place with more than half feeling that the public had ‘little’ or ‘no’ understanding. And of the respondents who did report significant change in their local conservation area in the last three years, more were likely to perceive a deterioration rather than an improvement. Street clutter, the loss of traditional paving materials, advertisements, a lack of maintenance and loss of historic details were the five most significant concerns identified by both groups. When the problem of the loss of historic detailing was examined in more detail the most frequently mentioned concerns were with doors and windows, signs and advertising, shopfronts and the deteriorating condition of front elevations generally.

The respondents came up with some very helpful suggestions about how local civic societies could become more effective in improving conservation areas. These included: building links between the local group and the local authority, raising general awareness of the designation, campaigning and using volunteers to actively manage places.

The surveys are part of series of activities planned by the three organisations over this anniversary year.