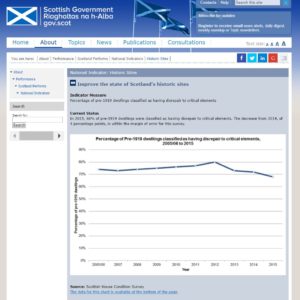 The IHBC has welcomed the announcement by Built Environment Forum Scotland (BEFS) that, following active engagement with the Scottish Government and across is members, a new National Performance Framework (NPF) measure for the historic environment has been adopted, the percentage of pre-1919 dwellings classified as having disrepair to critical elements.

IHBC Director Seán O’Reilly said: ‘We are delighted that the discussion on national measures for Scotland’s heritage, led by BEFS, has delivered this pertinent and socially inclusive new national indicator for the country’s historic environment.’

‘Of course we would also emphasis that the predecessor measure – the number of A-listed buildings on the Buildings at Risk Register – is just as important to the heritage sector.  Category A-listings are by definition nationally significant assets, and as a group they might easily serve as Scotland’s own national heritage collection, inclusive, accessible and economically significant in its own right’.

‘We are especially pleased that BEFS report did not let the obvious limitations in the new measure outweigh its benefits.  Any measure is by its nature selective, and BEFS rightly concluded that the upsides of the new measure outweighed the potential downsides of other, more inward-facing alternatives, such as site visits – which is reactive and does not measure outcomes – and public views on heritage and its care, which was considered too subjective’.

As part of its brief for taking forward development of a measurement framework for Our Place in Time (OPiT), the Measuring Success Steering Group (MSSG) has led on gathering stakeholder views on the current National Performance Framework (NPF) measure for the historic environment. MSSG understood that there is little scope for additional indicators and that the objective is to propose an alternative to the current measure which has been seen for some time as problematic.

The meeting (April 2016) considered an alternative proposal for a participation measure, which was to use data provided by the Scottish Household Survey (question CULT3A-G): Number of visits to historic places. It was felt that this is quite a passive measure, indicative of an interest in visiting historic sites but not active engagement.

The meeting also discussed another measure available in the Scottish Household Survey (question CULT7) which provides data on views on culture, heritage and the arts. Two options cover Importance of looking after heritage buildings and places; the meeting felt that this measure is too subjective for an NPF measure, but was supportive of using the data in wider advocacy activities. It could also be tracked alongside another. The second option provides Views on whether local heritage is well looked after; the meeting felt that this was a poor representation of condition.

Informed by the consultation, the MSSG makes the following recommendation: That the current measure of % of A-listed buildings on the Buildings at Risk Register is replaced with % of pre-1919 dwellings classified as having disrepair to critical elements (as set out below).

Stakeholders were keen that any replacement measure is more socially inclusive than the existing and that use of data reflecting the condition of pre-1919 housing would be more broadly relevant to communities across Scotland, thereby helping to mainstream the historic environment across wider policy areas. The Indicator is also amended slightly to reflect this wider coverage. Stakeholders were clear that the historic environment sector must retain at least one Indicator to represent the contribution of the sector within the NPF.

Stakeholders were keen that the NPF measure for the historic environment should seek to challenge and were comfortable that while the data has historically reported a positive trend, the recommended measure is challenging since the situation is actually quite poor (the 2014 measure indicating 72% disrepair to critical elements of pre-1919 dwellings). The data is robust – the survey is undertaken by qualified building surveyors and data is consistently gathered and has a wider reach/range of users than the Scottish Household Survey data (which was also considered for the participation option). Data on listed buildings can be specifically tracked within the SHCS and can be analysed over time.

The survey results clearly expressed a preference for an additional measure to allow reporting on both condition and participation. The meeting (April 2016) endorsed this view, advocating a preference for two measures as this would reflect the key tenets of Scotland’s Historic Environment Strategy, Our Place in Time (OPiT), which has cross-party support in Parliament. The upcoming review of the NPF provides opportunity for the sector to explore and advocate for a second measure that would measure participation. Stakeholders noted that beyond the NPF, the Measuring Success Framework which is currently being developed has potential to inform resource allocation and sector priorities.

Indicator Measure: Percentage of pre-1919 dwellings classified as having disrepair to critical elements

In 2015, 68% of pre-1919 dwellings were classified as having disrepair to critical elements. The decrease from 2014, of 4 percentage points, is within the margin of error for this survey.

Read the full report on the recommendation from BEFS