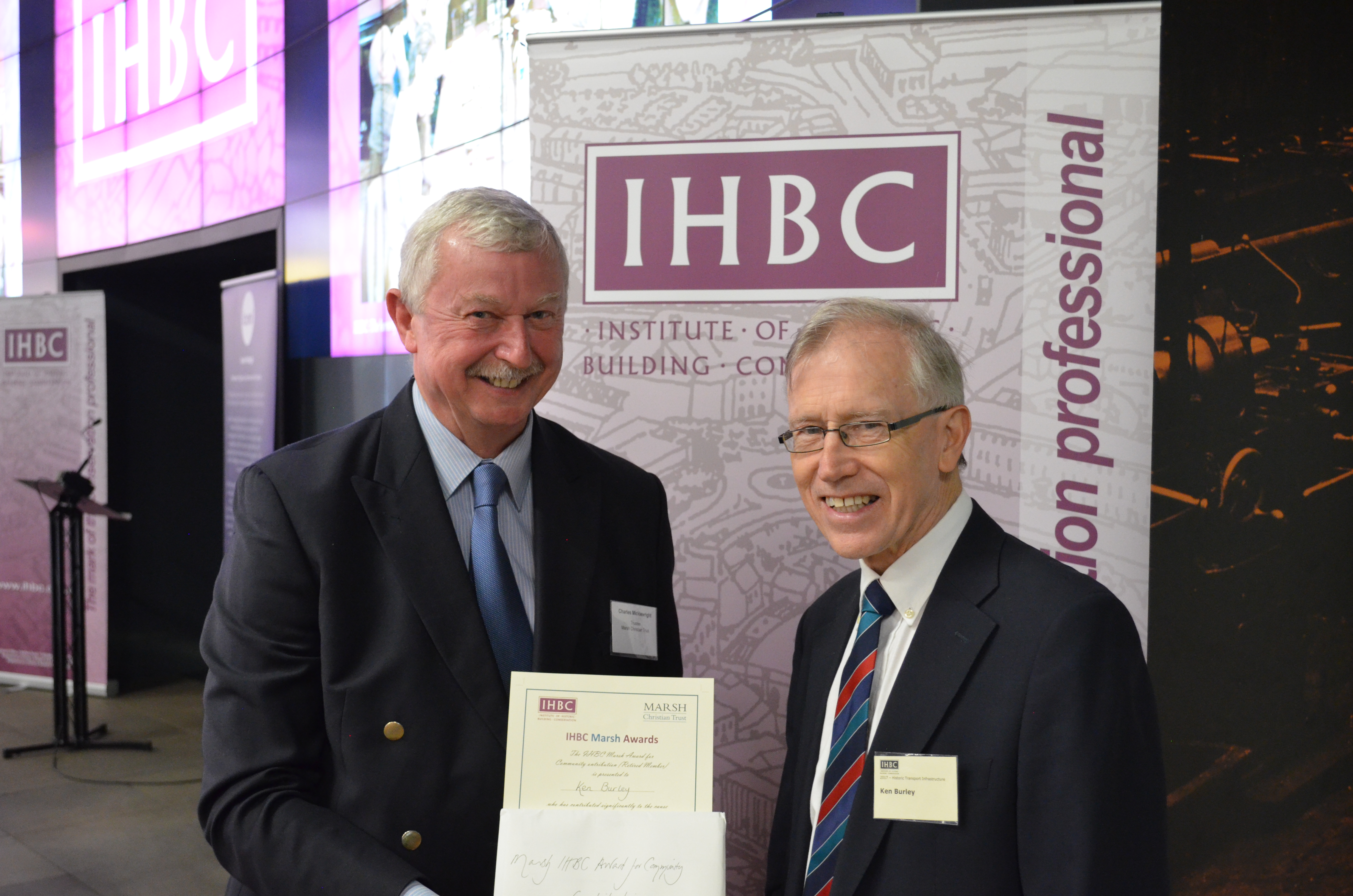 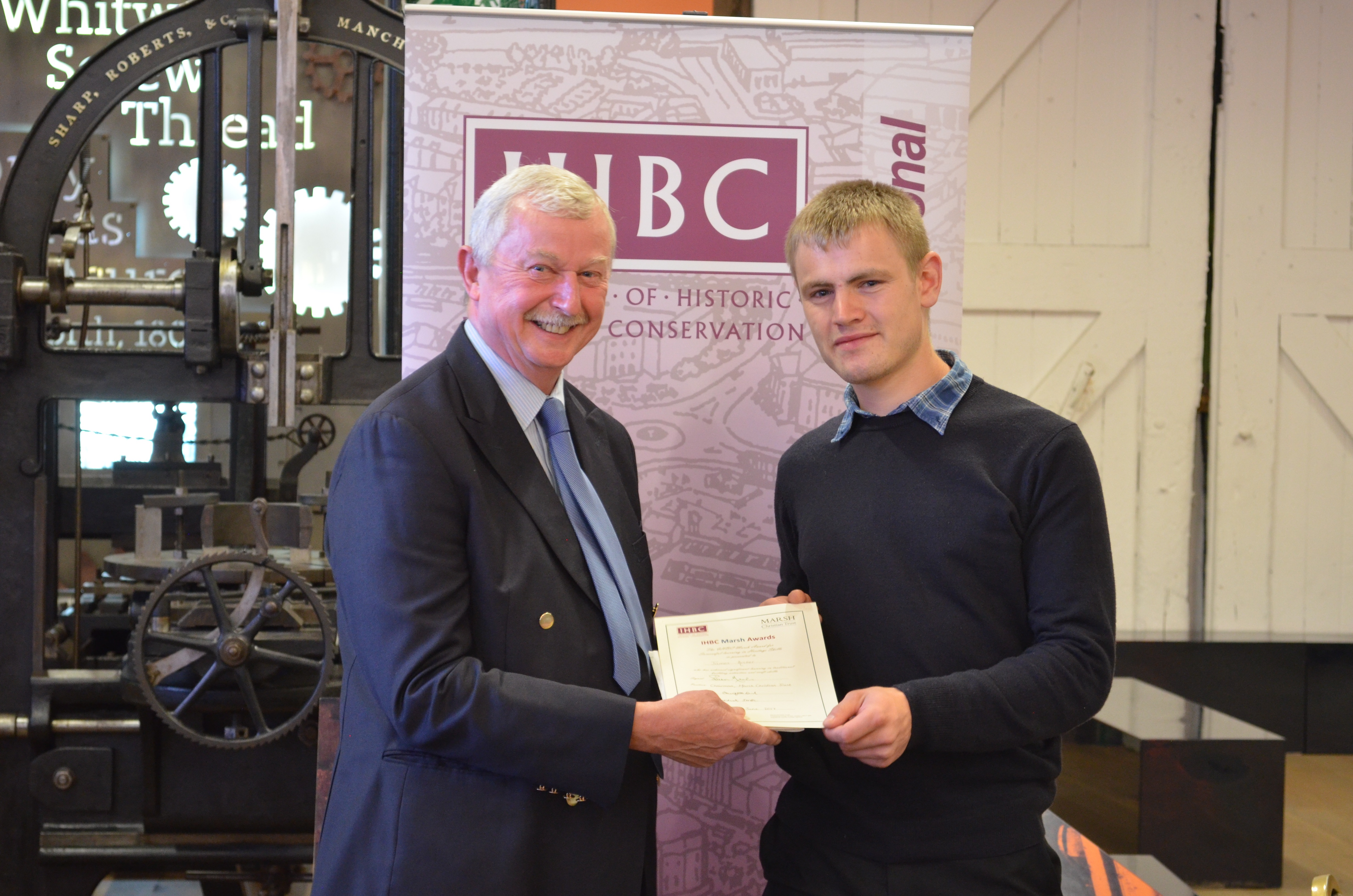 The Annual Dinner of the IHBC’s 2017 School in Manchester’s MOSI concluded with the presentations of awards, prizes and certificates to a range of winners across the IHBC’s renowned Gus Astley Student Award as well as the second year of the IHBC’s two Marsh Awards, for Community Contribution by retired IHBC members, and for Successful Learning.

Marsh Christian Trust trustee Charles Micklewright, presented James Archer, of the Canal and River Trust, with his Marsh Award and £500 prize for ‘Successful Learning’.  Among other considerations, the Award judges recognise how James, a construction apprentice with the Canal & River Trust specialising in masonry skills, ‘shares his skills with others [and] has given training sessions to the team and volunteer groups around the traditional skills of mixing and working with lime mortars… has great passion for the waterways… in addition to his paid work at the Trust, he volunteers with the Waterways Recovery Group in his spare time, to help to restore disused/neglected canals around the country’.  Having enjoyed the School programme so much, James has applied for IHBC membership.

Ken Burley, ‘a keen RTPI and IHBC Member’, also enjoyed the Full School experience, and received his Marsh Award for his long-standing work with the South Yorkshire Buildings Preservation Trust, especially for ‘enabling its talented members to work to their full potential to achieve a successful outcome despite the formidable challenges’.

Both James and Ken were able to take up their free places at the 2017 Annual School in Manchester, courtesy of the IHBC, and receive cash awards from the Marsh Trust in person at the IHBC’s Annual School Dinner.

Edith Gollnast received ‘Exceptional’ recognition under the Award programme, and £250, for her ‘meticulous drawing of Oxford’s buildings to illustrate a series of books on heritage walks… the proceeds of the books go towards furthering the work of the Oxford Preservation Trust.’  Unfortunately Edith was not able to attend the School.

The winner of the 2017 Student Award, Hilary Wyatt, had already spoken to her work at the IHBC’s 2017 Day School’s closing ‘Spotlights’ sessions earlier in the day, so many were aware of her work on historic marine infrastructure.  The dissertation David Trench commended especially for its ‘valuable contribution to this specialist subject… overlooked as a conservation priority.

Hilary, then on the IHBC-recognised conservation course at Cardiff University, is now a PhD student there, developing her work programme on marine infrastructure.

As part of a wider agenda to help conservation in her subject area, Hilary has agreed to lead a new type of volunteer ‘Group’ in the IHBC, using her Spotlight session to call for interested volunteers to her marine and coastal conservation task force and network.  As this is still being established, anyone interested in joining should contact Carla Pianese, IHBC’s Support Officer, at support@ihbc.org.uk.

Bob Kindred MBE, independent conservation consultant, IHBC research consultant and trustee of the Gus Astley Fund – which has underpinned the development of the IHBC’s annual Gus Astley Student Award – added to the awards for 2016 with two submissions worthy of particular commendation as Gus Astley Fund ‘Trustee Selections’ in the Student Awards programme:

All were offered places at the 2017 School to receive their cash prizes and Award certificates.

For more on the Gus Astley Student Award, and to submit for the 2017 award, which closes on 31 July, see the website