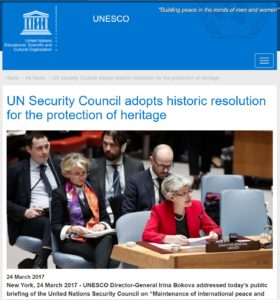 The United Nations Security Council has unanimously adopted the historic resolution 2347 – the first ever resolution adopted by the Security Council to focus on Cultural heritage – in which it ‘Deplores and condemns the unlawful destruction of cultural heritage, inter alia destruction of religious sites and artefacts, as well as the looting and smuggling of cultural property from archaeological sites, museums, libraries, archives, and other sites, in the context of armed conflicts, notably by terrorist groups…’

UNESCO Director General Irina Bokova addressing the Security Council in support of the resolution said: ‘The deliberate destruction of heritage is a war crime, it has become a tactic of war to tear societies over the long term, in a strategy of cultural cleansing. This is why defending cultural heritage is more than a cultural issue, it is a security imperative, inseparable from that of defending human lives. Weapons are not enough to defeat violent extremism. Building peace requires culture also; it requires education, prevention, and the transmission of heritage’. She added, ‘this is the message of this historic resolution.’

The briefing was held at the initiative of France and Italy and under the Presidency of the United Kingdom.

Resolution 2347 is the first ever resolution adopted by the Security Council to focus on Cultural heritage. The unanimous support to the Resolution reflects a new recognition of the importance of heritage protection for peace and security.