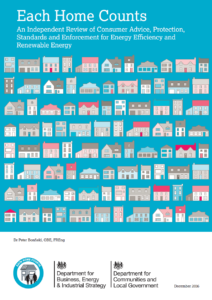 The Department for Business, Energy & Industrial Strategy consulted on these proposals but the IHBC Consultation Panel found that Each Home Counts fails to consider traditional buildings, especially those with solid walls, which is a serious omission as these represent almost a quarter of the UK’s building stock.

This is evidenced by the very large number of existing research reports – including those funded by DECC and developed by BRE – that are not referenced in any way. Some of these point specifically to future actions on solid wall insulation. It is surprising that these reports were not considered as Each Home Counts was led by the BRE Chief Executive.

The failure of Each Home Counts to consider traditional buildings is further highlighted by the lack of engagement with heritage experts when developing the report’s findings and recommendations (e.g. IHBC and DECC’s Older Properties Working Group), and no clear engagement with those beyond the review’s contacts in industry, consumer protection and government. The Retrofit Standards Task Group has been established under the auspices of BSI but doesn’t include a heritage expert.

By concentrating on how the energy conservation industry should perform, the report fails to take into account the proved differences in how buildings perform depending on the lifestyles of their occupants. The report makes no recommendation on educating occupants about their impact on energy efficiency but the Sustainable Traditional Buildings Alliance’s (STBA) Responsible Retrofit Guidance Wheel shows that human behaviour can significantly affect energy efficiency. Failure to consider occupants’ lifestyles may distort the claims of anticipated efficiency of alterations and result in unsuitable solutions.

There is also no consideration of existing standards (e.g. BS 7913:2013 Guide to the conservation of historic buildings and the National Occupational Standards for Older, Traditional, and Vulnerable Buildings), Building Regulations (specifically the special consideration of buildings of traditional construction and breathable fabric in Part L1B) and issues raised by IHBC in previous consultations (e.g. PAS 2030).

Future actions – such as the development of the Consumer Charter, Code of Practice and Standards, Standards Framework, the Information Hub and the Implementation Board – should engage with heritage experts and fully reflect the related documents to ensure traditional buildings are completely considered.

Future actions for skills and training should encompass the CITB Energy Efficiency & Retrofit of Pre-1919 Traditional Buildings Level 3 Award (which includes building pathology) and those given the Quality Mark must have proven knowledge in traditional construction. The proposed Framework doesn’t mention the need for training in traditional building construction, which was raised by IHBC in its response to the CITB ConstructionSkills draft skills strategy 2012-17. The potential for new jobs created from a focus on the repair, maintenance and retrofit of traditional buildings has been overlooked.

Some future processes – such as the Framework, the CIGA and BBA work on pre-install property assessments, and the Retrofit Standards Task Group – need clarifying to ensure that they are complete, robust and independent. As-yet unpublished documents, such as the Moisture risks paper, are vitally important and should be urgently completed and circulated to allow scrutiny by heritage experts. The project plan for the standards mapping exercise by the Retrofit Standards Task Group should be published as the April 2017 delivery date appears to be very challenging.

Appropriate repair of traditional buildings is a prerequisite of effective energy-saving, as highlighted in BS 7913. Each Home Counts doesn’t even mention the need for repairs. Traditional buildings are already inherently sustainable due to their embodied energy and their repair avoids contributing to carbon emissions that would arise from replacing them with modern homes using large amounts of concrete and cement. The BRE has calculated that an average Victorian house contained the embodied energy equivalent to about 15,000 litres of petrol. This would equate to 3,300 gallons, which at 40mpg would travel 132,000 miles or the equivalent of 16 times around the equator.

More detailed comments that support and expand on some of our points, made by the IHBC Policy Vice Chair, can be found at http://www.ihbc.org.uk/resources/EACH-HOME-COUNTS-30.1.17-issues-paper-by-J-Preston-FINAL.docx. We are aware that many other heritage sector bodies will be raising similar concerns.

Each Home Counts aims to address ‘Consumer Advice, Protection, Standards and Enforcement for Energy Efficiency and Renewable Energy’. However, traditional buildings, especially those with solid walls, represent a significant proportion of the UK building stock. Without fully considering these buildings, engaging with heritage experts and considering existing research, Each Home Counts risks creating an ill-informed strategy, with consequent expensive and inappropriate works to buildings, and therefore fail to fully deliver its objectives.