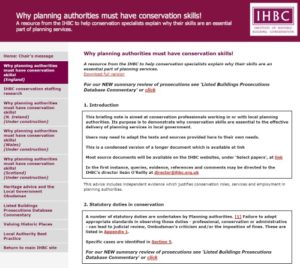 IHBC’s research co-ordinator Bob Kindred MBE has offered an interim update on his regular research into the Local Authority conservation jobs market in England, noting that ‘Numbers are holding up well-enough but at this rate may under-hit last year’s total’, and that the IHBC ‘is concerned to encourage local authorities to employ staff with the proven professional competences in order to safeguard against corporate reputational damage arising from expertise not being correctly deployed or where heritage management best practice is not followed.’

As 1 July marks the halfway point in the Institute’s year-on year-monitoring of local authority posts, several particular issues have been notable.

If the number of posts advertised in the second half of this year is similar to the first, there will be an overall fall from the recruitment level in 2015 and this might mark a stalling of the recovering of local authority specialist building conservation staffing that has improved each year since 2011-12. Generally recruitment is stronger in the first half of each calendar year, but not always.

It has also been noticeable that recruitment of the right candidates is proving difficult with twelve authorities having to re-advertise the identical specialist post within three months of the first recruitment advert being placed.

It was clear in 2015 that the added value of full membership of the IHBC was appreciated by local authority recruiters with 60% of posts specifying full membership of the Institute as essential (up from 42% in 2014) and so it was disappointing to note that one post was seeking a recruit to an A-level standard of education, with a degree being only ‘desirable’ notwithstanding that the role required taking the lead on complex and contentious development management cases and conducting conservation area character appraisals.

The figures exclude re-adverts of the identical post within six months [of which there have been 12 so far], so suitable recruitment appears to be more difficult

The Institute is concerned to encourage local authorities to employ staff with the proven professional competences in order to safeguard against corporate reputational damage arising from expertise not being correctly deployed or where heritage management best practice is not followed.

For more on LA skills see the links the IHBC webpage